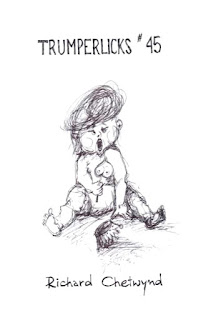 I know a tycoon buffoon named Trump,
A blowhard in a goldplated dump;
The people called him forth—
Celebrity trumps worth!—
For whom the world is a hole to hump.

There once was a peacock named Donald
Who traced his roots to bonny Scotland—
He wanted nothing else
But to grab beaver pelts,
Before his huge feathered head went bald.

Let’s Sieg Heil the cad with orange hair
Who likes to brag that he grew a pair—
He applauded himself
When he spelled “mini-golf”
Like a brat in a gilded highchair.

Our leader, dimwit confidence man,
Has our decline as part of his plan—
He conquered the place
By corrupting the race,
Soon to be king of a garbage can.

President Triumph loves his daughter,
And would love to put his paws on her—
When he saw her in bloom
He bustled from her room
To check if her mom wasn’t hotter.

I’m for burning coal, and fracking oil,
And helping ‘mancipate Blacks from toil;
I love the Hispanics
In the old cowboy flicks,
And GMO popcorn that don’t spoil.

“The Russians are bad and do sad things.
And Venezuela, hugely stinks!
And Assad is so sad,
And Iran is so bad,
But I have one of the best golf swings.”

If you get sick you can suck it up.
If you die, it’s a win-win lollypop.
I got the greatest deal,
Most awesome spiel,
But get the shit done by Special Op!

“Fuck all the people who you can’t sell
And buy them a ticket straight to hell,”
He explained to his boys
Before taking their toys
Because human and daddy don’t gel.

Dad loved Nazis, but mostly their shoes.
Mom was a potato, she didn’t bruise.
I married gold-diggers.
It’s like having chiggers.
Did you guys catch me on the Fake News?

I love uniforms who cry and pray
When they kill children on a bad day
And then get really sad:
“Am I really so bad?”
They wouldn’t bother asking anyway.

My daughter’s got a nice you-know-what,
And it’s not what you think, not a twat,
But a really good brain,
The biggest female brain.
Married a rich kid, hit the jackpot.

My boys, they love to travel and hunt.
They love animals, but I like Kant
In some village somewhere.
We pay our tourist share
Into the woman’s future life-fund.

North Korea’s the one place I’d nuke,
It’s run by a crazy commie gook.
Not meant in a bad way,
But it’s much easier to say
Than Kimmy Jung un, history’s fluke.

I pardoned Arpaio ‘cause I could,
Just a good cop in bad neighborhood—
Those hombres are real tough
And we’ve had ‘bout enough.
I can build it with Canada’s wood!

I’m in love with crooked banks, not Wall Street.
They would be so smart to kiss my feet.
Lines of credit can heal
Any type of dark deal:
If you work the oven, own the heat!

I defeated Marco, Jeb, and Hill,
And people still think I lack the will
To govern the country—
(Imagine a cunt tree!)—
I start each day with an ugly pill.

I love gold, even if it’s just paint.
Something about it makes me faint,
The sparkle looks so rich!
Lady Luck’s a tough bitch
And won’t put out for no stupid saint.

For hawks, a winnable little war.
To doves, I vow not a bullet more.
For the unemployed, jobs
Before they turn into mobs
And come at me like pimps on a whore.

This earth, such a fertile tank of gas,
Should be awarded a Miss Planet sash—
I’d grab her oozing woods,
And finger deepest roots;
Come morning, she can kiss my fat ass!

They say I’m connected to the mob
And think that’s how I landed the job,
But I’m zackly like you:
I want one, then take two,
In the race to be the richest slob.

My wife’s from a latent fascist state,
Which is good, for the sake of hate.
I picked her out one night
At a party.  My light
Like a diamond made her want to mate.

You can’t say I’m bad for business.
TV News used to make a lot less.
I just open my mouth,
Profits go north of south
Even when I peddle a Herpes’ kiss!
.
24

Love Indians, not their casinos.
And Blacks, you know, worked mostly pro-bono
For a few hundred years
Shedding blood and hot tears,
And still got less than a white crack ho.

It’s a worldwide cut-rate puppet show,
And I’m the star!  I go with the flow!
I apply the make-up,
Hug me a crewcut cop,
Then pay PR to polish the glow!

The quacks gathered to say I’m insane
‘Cause I love pussy (or a choochoo train).
My mind is so damn fast
My best thoughts run right past. . . .
What was that I was saying again?

I send cruise missiles wherever I choose;
You set the clock for permanent snooze!
You don’t know when or where.
I doubt you’d even care.
That makes two of us: that’s the real news!

My predecessor broke his word,
Then Hillary, OMG, absurd!
I’m boss only for four
If not many years more.
Don’t worry, I’m not really a turd.

My presidency inspires revolt
But I don’t fear the American dolt,
His keystrokes are all mine
I’ll break him with a fine
And blackmail the horse inside the colt.

My bestest friends are those who can pay.
If they have no cash I don’t let them play
In my sandbox no-how,
Except maybe a cow
If she’s the kind with big boobs that sway.

I’m a great judge of ladies’ beauty
And even God knows I’m a cutie,
So I peek as they dress
And pay them to confess
How they’d love to give me some booty.

Destined for things cosmological,
I followed the stars like I’m nautical:
I sailed so friggin high
Some are dying to die,
Convinced I’m crypto-despotical.

The other ones bombed so I will too
Even if the whole world says poopoo,
We’re Americans, see,
And we like to be free
To fuck you up in lieu of a coup.

I go through women like a storm through trees,
So many I count them in groups of threes.
I’ve yet to meet the girl
Who refused a real pearl
For a short few seconds on her knees.

Republicans are so full of shit,
They wagged their tails and that’s about it.
The Democrats all suck,
Ask Schumer, what a schmuck!
I wish somebody would pop that zit!

There once was a bore we all abhor
Who soiled the office many adore,
He swore and decreed
In secret as he peed
His revenge on the people who roar.

I like Iranians, the ones that we fixed,
Who live in New York and ape our tricks,
They don’t love that Allah
Like the Ayatollah
Who outlawed booze and titty pics.

I trust real people who never read,
They will journey abroad just to bleed
For the red, white, and blue,
Baseball, Gaga too,
While in my tower I count the green.

Once was an exile, loved his I-phone,
We gave a CIA Predator drone
To fight for democrats
And his dad’s funny hats:
Murder’s heroic in a warzone.

I saw the studies but trust my gut
To steer the country out of this rut,
The longer that we stay
There will come a day
The Chinese and Russians want their cut.

Politics is so entertainment
Is what I proved for your containment:
I am current trends
On long golfing weekends,
Tapping my foot for late payment.

Dreaming of being the president
Like all kids rich who’re power-bent
I’d lie at night in bed,
Carved ceiling overhead,
Adding up the nation’s future rent.

Obama was oh boy something else, huh?
He practically wrecked the nation, duh.
The black half of himself
Put the white on a shelf
And that’s why the KKK picked moi.

I love miners and those who work hard
Being white, but I don’t like that bard,
Whatshisname? He’s a bum,
No talent, a real scum,
And such a sad man. Punch in Richard.

Posted by American Peacock at 12:30 PM